The scorching sun was killing us, the heat was unbearable
and even the air conditioners failed at that point of time. The fact is that I
can bear heat but my husband can’t and gets irritated quickly.  On the day of Thursday, I received a call from
my brother that’s let’s plan a trip to Rishikesh for river rafting and
trekking. I got so excited after that call, just imagining the fun we would
have, enjoying in cold river water. A weekend getaway, away from heat and
scorching sun but suddenly my husband felt like a big boulder blocking the way
of river and diverting its course. The problem is that my husband is
hydrophobic and would not agree for this trip. It is not that I can’t go alone
but I knew that he was the one who was suffering the most.   So thus started my mission “JAL VIHAR”. 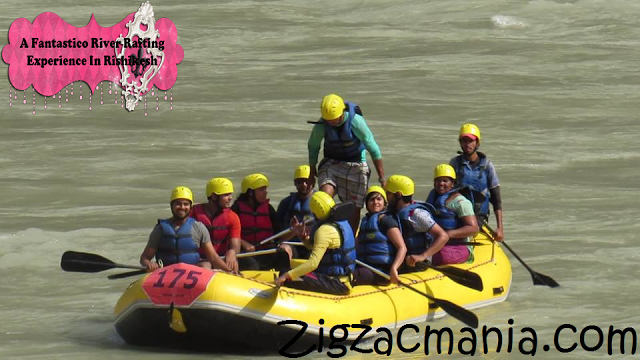 After a lot of convincing, emotional drama finally he got
ready and next day we were off to Rishikesh. The members of our car were my
mother, two brothers and husband, trust me we were all anxious and excited
about our river rafting program except one who looked a bit nervous too. I know
you can guess that person, right?

After 6 hours of travel we reached Haridwar, it was dawn
that time, so we attended the grand prayer at the banks of holy Ganges and
spoke to our guide for fixing our time for next day river rafting ride. We all
slept with dreams of river rafting. 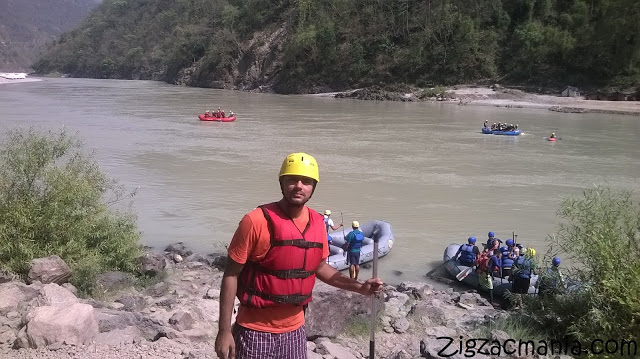 Next day early morning by 8 AM, we were dressed up and ready
for the ride of our lifetime.  We reached
Rishikesh by 9.30 AM, met our guide’s team and were dressed up for rafting. All
that heavy gear made me feel like a Marine commando, those rudders felt like
AK-47s and only gear left were those hot black aviators. Next moment felt like
we closed our eyes and we were in our raft, pushing it forward with our
rudders.

In beginning it as a bit boring as the river was placid and but in an instant before we even blinked our eyes, we were in rapids. Every moment it felt that our raft will turn upside down and that thought made me tenser as I don’t know swimming. Our shouts were suppressed in the loudness of the river water splashing against the banks and our boat; we just kept pushing the raft hard across the strong river currents. In 5 minutes we were so tired , but none of us had time to think about it , only two things which we concentrated on were the commands of our guide ( he felt like an army commander steering us through the war line) and just pushing our boat. We all people felt that we are professionals and even tend to ignore that our rudders collapsing between each others. 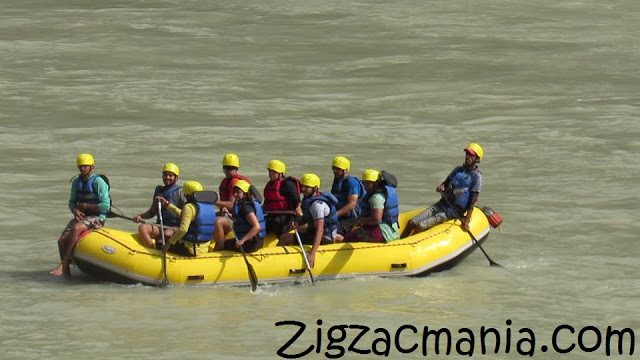 After rapids the river went again quiet and our guide asked us to jump in the river. After a prompt thought we just jumped in water and only person who stayed on boat was my hubby, we all tried to convince him to but he was stiff as a statue. But we enjoyed in the cold, refreshing water of Ganges. Relaxation never lasted long when we came aboard again and rode in quiet water again in forward direction. Sometime later we stopped near a short cliff from which people were jumping off in water. That looked so so exciting; we hurried to stop the boat near it and ran to top of the cliff for our turn to jump. When we were busy in our leap of faith, I noticed that one person is missing. Obviously that person was my husband and what I see him doing, was unimaginable. He was busy eating noddles while sitting in water. In next moment we all were there snatching noodles from his plate. The snatching game went for some while and then we dragged my hubby to cliff for helping him to have his faith of leap. He he he.  After one fall
he also lost his fear and enjoyed with us. I know I am being skeptical about my
husband’s losing his fear than gaining his courage as he is more afraid of
water than to gain his courage against it. 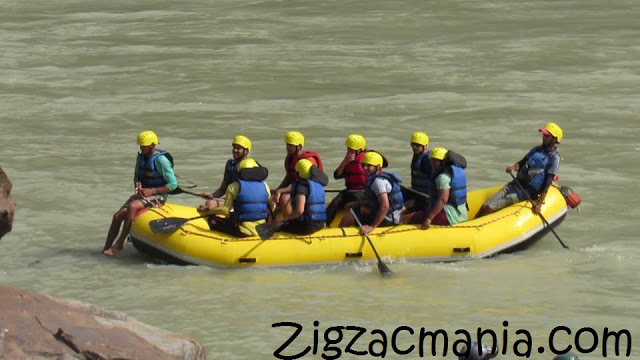 The good moments never last long in our life as we need o
experience better ones, so we were off again in water and trust me the last
turbulence or rapid was huge. The time boat went inside it, we never knew how
we would come out of it.  One guy was
sitting on the front of our raft acting as he was saving our boat from overturning;
I seriously doubt that, as he looked only 50 kg heavy. Anyhow we never had
choice and our work was just to paddle hard (that’s a self appraisal statement
as I knew that all we did was just tangling our rudders as usual). After
surviving the fury of Mother Nature we were so happy and clapped for our
victory. The moment one guy was so happy that he left his guard and fell in
water.  In a glimpse our guide jumped in
water and saved him. After the river turned, we saw the temples on the banks
and so ended our journey of river rafting. 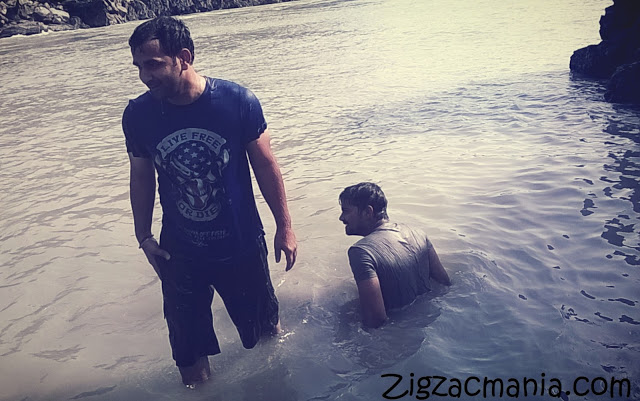 After coming out of our raft, all we could feel was the
weight of our legs and couldn’t walk properly due to tiredness. I could say
that we crawled till our hotel and slept like we climbed Mount Everest.  All got up next morning, and we left our
hotel having a feeling that we would return next year for the same thus ended my mission “JAL VIHAR”.  And waiting for “JAL VIHAR -2”. He he he.

This blog post is inspired by the blogging marathon hosted on IndiBlogger for the launch of the #Fantastico Zica from Tata Motors. You can apply for a test drive of the hatchback Zica today.